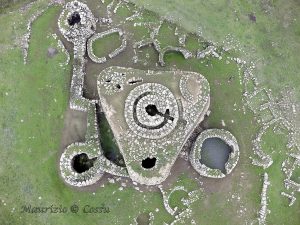 Years ago the scholar Marcelo Serra wrote one of the most significant publications on Sardinia entitled “Sardinia almost a Continent”. We this project we aim at generating in the Sardinian pople an awarness of the importance that Sardinia and its history has had over the century.

Nuragicamente had the goal of generating and consolidating in Sardinian people an awarness of the importance that Sardinina and its history has had over the century. The project is divided into a series of itinerant actvities and events focused on involving and thrilling the widest possible audience, Sardinian and non-Sardinian, with the aim of spreading, with a simple anc clear language, knowledge and interest in the ancient Neolithic and Nuragic civilizations to enhance territories and communities of reference. The proposed initiatives aimed at bringing people closer to history and archeology and more generally to culture, in a direct and informal way, using different communication and sensorial channels. Culture can bring positive changes in society. The conditions must be created by fostering knowledge and dialogue from below with a view to subsidiarity and the implementation of the various components of our varied society, in the belief that culture belongs to everyone and is for everyone. In consideration of what happened with the pandemic, due to the Covid-19 ordinances and DCPMs, the original project was remodeled in order to avoid gatherings and the remote communication system was privileged, through direct on social networks and videos to the in highly evocative and suggestive contexts such as in the nuraghe Domu and s’Orku in Sarroch from where the event started with a live broadcast on Facebook. During the shooting, the audience also had the opportunity to interact directly in the broadcast and contribute to enrich contents of the services that have been created. Subsequently, events were held in Santa Teresa Gallura with the participation of the writer Sergio Frau and in Arbatax and Dorgali where the project allowed for the presentation (both static and dynamic) of a reproduction of a Nuragic boat. This work is created by the artist Andrea Loddo who together with a staff of qualified professionals also made a short film on the Nuragic civilization. Finally, in December the project ended in Cagliari at the Monte Claro site where the attention of public opinion was drawn to a site that probably of Nuragic manufacture which should be excavated and studied for its importance and which is in a state of neglect. The project was carried out in collaboration with other partners including: CSR4, Amici di Sardegna Association, S’Arrocca Onlus, ACENTRO, Antonio Gregorini, CASCOM, Itinerari di luce, Urbanchallengers events lda. During the year, numerous inspections and journalistic reports were carried out in order to involve the largest number of local communities in the activities. Among these: Sarroch, Santa Teresa Gallura, Tortolì, Arbatax, Dorgali, Cagliari, Goni, Suelli and others.